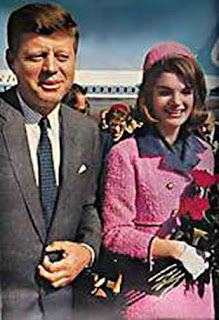 Today marks the 45th anniversary of the assasination of John F Kennedy. As I watch the footage on the news, I am reminded of how brave Jackie was. She is a woman I have admired all my life. I wondered what happened to the suit she wore pn that day and I decided to find out. I was lucky enough to find an article by David M. Lubin, a professor of art at Wake Forest University and the author of "Shooting Kennedy: JFK and the Culture of Images" (University of California Press, 2003).

When first lady Jacqueline Kennedy emerged from Air Force One at the side of her husband on a sunny day in Dallas 40 years ago this weekend, no one could have guessed that the double-breasted, strawberry-pink Chanel suit she was wearing was soon to become the most legendary garment in American history. Today, sequestered from sight in a vacuum-sealed box in a secure, climate-controlled corner of the National Archive, the pink suit amounts to a sacred relic of a national nightmare.

Even after it was soiled by her husband's brain matter, when he was assassinated in her arms in the back of the presidential limousine, she refused to change out of the suit for the long flight with his body back to Washington, D.C.

In a famous wire service photo of her departing from the presidential plane at Andrews Air Force Base, with her hand clasped in that of her brother-in-law, Robert Kennedy, the splatter of blood across the skirt of the Chanel suit is conspicuous and startling.

Startling, not simply because first ladies had until then always existed in a world magically, mythically, sealed off from blood and other messy substances of daily life and suffering such as grease, grime and dirt. But also because in 1963, the item of apparel known as the Chanel suit was just about as solid a symbol of bourgeois female chic as could be found anywhere in the Western world. By wearing a Chanel suit, a woman gave notice that she was smart, classy and independent. She was not expected to have her suit bloodied like a butcher's apron.

The brand name Chanel refers to one of the most impressive and influential women of the 20th century, the French fashion designer Gabrielle "Coco" Chanel. In the '20s and '30s, her clothing offered women the relaxed freedom of movement previously reserved for men. Eliminating stays, bustles and corsets, and substituting silk, cotton or wool jersey for satin, Chanel introduced loose-fitting sweaters, blazers, pleated skirts, trench coats and the trademark "little black dress." In the '50s, returning from retirement in protest against the newly constrictive styles dictated by couturier fashion, the 71-year-old designer began manufacturing elegantly understated suits for women.

By the early '60s, the Chanel suit had become a wardrobe staple of the upwardly mobile American female. A Chanel suit fit almost every daytime occasion that required a woman to dress stylishly.

It was thus the perfect outfit to wear in a presidential motorcade.

Or was it? During the 1960 campaign, the Kennedy camp had come under withering criticism for Jackie's devotion to high-priced French fashion. Conservatives claimed that such devotion was needlessly extravagant and, as such, a harbinger of the liberal overspending that they predicted would become rampant in government, were her husband to be elected. Moreover, why wasn't the candidate for the top office in the land insisting that his wife settle for clothing made in America?

Kennedy's rival for the presidency, Vice President Richard Nixon, had already, years earlier, sung praise of his wife, Pat, for being satisfied to wear what he called "a good Republican cloth coat." Defensively, Jack insisted that Jackie cut down on her couturier bills and from now on buy American.

The situation changed after the first lady's triumphal visit to Paris and Vienna in 1961, where the crowds clearly adored her and such prickly figures as French president Charles de Gaulle and Soviet Premier Nikita Khrushchev, whom she met in Vienna, were visibly enchanted by her charm. This is when President Kennedy introduced himself as "the man who accompanied Jacqueline Kennedy to Paris."

Commenting on her triumph abroad, an English newspaper wrote, "Jacqueline Kennedy has given the American people from this day on one thing they had always lacked -- majesty." The American public basked in the reflected glory of its first lady, and now Jackie could wear whatever she pleased. Although she continued to appear in public in American-designed and American-made clothing, she occasionally opted for a French outfit, such as the Chanel suit.

The color of the suit was not insignificant. It was pink. Nowadays we may take pink for granted, but in the '50s it was a new color in fashion, and it was associated most of all with Jackie's predecessor in the White House, Mamie Eisenhower. As the popular culture historian Karal Ann Marling has noted, Eisenhower was such a fan of the new hue that it was commonly called "Mamie Pink."

Possibly, Jackie wore pink in Dallas as a subliminal nod, not specifically to Mamie Eisenhower but more generally to the traditional femininity with which pink had come to be associated in the postwar era. Perhaps because she was making an appearance in a notoriously conservative part of the country, Jackie chose pink as a way of compensating for the suspiciously foreign and feminist associations of her Chanel suit.

Hearing of the assassination, the public learned that Jackie's suit was pink but they only saw it reproduced in black and white. In 1963, newspapers did not print color photography, nor did television broadcast the news in color.

When Life magazine issued a special report on the assassination one week later, it provided frame enlargements from the home movie footage made by Dallas dress manufacturer Abraham Zapruder, who had inadvertently captured the killing on color film. Acquiring exclusive rights to Zapruder's home movie, Life printed these frame enlargements in black and white, contrasting them to a glorious, vividly colored, full-page photograph of the Kennedys disembarking at Love Field.

It wasn't until 11 months later, when the magazine published a special report on the findings of the Warren Commission, that the public had the opportunity to see the mayhem in Dealey Plaza in color. This time, Life printed eight frame enlargements from the home movie, all in vivid hues.

Now the pink of Jackie's suit was not only visible, it was conspicuous, set off against the navy blue of the presidential Lincoln Continental, over the trunk of which she lurched. The term "shocking pink" was not invented for this occasion but it might well have been.

Oddly, the editors for this issue of Life chose to follow the grisly sequence of color photos of the assassination with an automobile ad spread out over two pages. This in itself wouldn't be strange, but the new model car that was being advertised was a Lincoln Continental, which the ad copy trumpets as "America's most distinguished motorcar." Perhaps it would have been more appropriate to say, "America's most notorious motorcar."

The slender brunette poised beside the new Lincoln Continental wears a Chanel suit. Not only that, it's unmistakably pink. All that's missing is the pillbox hat and the armful of roses. From today's vantage point, Life's placement of the ad seems in surprisingly poor taste.

Considerations of taste may explain why the pink suit remains locked in storage in the National Archive, not available for public view until the year 2103. The suit was donated anonymously to the Archive shortly after the assassination.

One can only surmise that the owner of the suit, the president's widow, recognized its historic significance and thus deposited it in the place where America's most important documents are maintained and yet also wanted it kept discreetly out of view until it ceased to have a sensational, voyeuristic value.

Though it's not made of paper but finely woven colored thread, the pink suit is indeed a sort of document. The story it tells is not only of one woman's fashionable sophistication and international outlook but also of America itself in November 1963, modern, beautiful, and shockingly stained with blood.
Posted by Shari Beck at 9:12 AM