Title of the Cross 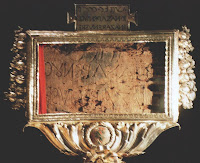 The Holy Relic "Ex titulo DNJC" is on display at St. Croce

According to several Church historians of the 4th and 5th century, the Title of the Cross was discovered in 325 AD when St. Helena, mother of Emperor Constantine the Great ordered the removal of a pagan temple built by Hadrian over the site of the Calvary and the Holy Sepulchre.

Helena divided the most precious wood inscription and brought the half with the words I NAZARINUS R... to Rome. It is still preserved and venerated in the Basilica di S. Croce, one of the seven main churches of the Eternal City.

In 1998, a careful investigation was commissioned by the Vatican and seven Israeli experts on the dating of inscriptions (comparative palaeography) dated its letters into the 1st century, the time of Christ. This makes it one of the most remarkable and most authentic relics of the Passion of Our Lord. It is the only contemporary document naming Our Lord and confirming the veracity of the Gospels - it also proclaimed that He was the true messiah, the "King of the Jews"!
Posted by Shari Beck at 6:53 AM No comments: