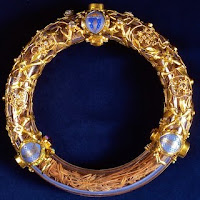 I was forunate to see the The Crown of Thorns, a relic at Notre Dame Catherdral in Paris a few years ago.

It has a colourful history.

St. Paulinus of Nola, writing after 409 AD, referred to "the thorns with which Our Saviour was crowned" as relics held in honour. Cassiodorus (c. 570), when commenting on Psalm lxxxvi, speaks of the Crown of Thorns among the other relics which are the glory of the earthly Jerusalem. "There", he says, "we may behold the thorny crown, which was only set upon the head of Our Redeemer in order that all the thorns of the world might be gathered together and broken". Gregory of Tours, in De Gloria Martyri, mentions that the thorns in the Crown still looked green. Antoninus of Piacenza (6th century) wrote that the Crown of Thorns was currently shown in the church on Mount Zion. From these fragments of evidence and others of later date (the "Pilgrimage" of the monk Bernard shows that the relic was still at Mount Zion in 870), it is likely that what purported to be the Crown of Thorns was venerated at Jerusalem from the 5th century for several hundred years.


According to Francois de Mély, the whole Crown was not transferred to Byzantium until about 1063. In any case Justinian (d. 565) is stated to have given a thorn to St. Germain, Bishop of Paris, which was long preserved at Saint-Germain-des-Prés, while the Empress Irene, in 798 or 802, sent Charlemagne several thorns which were deposited by him at Aachen. Eight of these are said to have been there at the consecration of the basilica of Aachen. Four were given to Saint-Corneille of Compiègne in 877 by Charles the Bald. One was sent to the Anglo-Saxon King Athelstan in 927, and eventually found its way to Malmesbury Abbey. Another was presented to a Spanish princess about 1160, and again another was taken to Andechs in Germany in the year 1200.


The Holy Crown of Jesus Christ was bought by Louis IX from Baldwin II. It is preserved today in a 19th century reliquary, in Notre-Dame Cathedral, Paris.

Louis built the Sainte-Chapelle (completed 1248) to receive it. The relic stayed there until the French Revolution, when, after finding a home for a while in the Bibliothèque Nationale, the Concordat of 1801 restored it to the Church, and it was deposited in the Cathedral of Notre-Dame. New reliquaries were provided for the relic, one commissioned by Napoleon, another, in jewelled rock crystal and more suitably Gothic, was made to the designs of Eugene Viollet-le-Duc. In 2001, when the surviving treasures from the Sainte-Chapelle were exhibited at the Louvre, the chaplet was solemnly presented every Friday at Notre Dame. Pope John Paul II translated it personally to the Sainte-Chapelle during the World Youth Days.

According to M. De Mély, by the time when the crown was brought to Paris the sixty or seventy thorns had been separated from the band of rushes and were kept in a different reliquary. None of these now remain at Paris. Some small fragments of rush are also preserved ... at Arras and at Lyons. With regard to the origin and character of the thorns, both tradition and existing remains suggest that they must have come from the bush botanically known as Ziziphus spina-christi, more popularly, the jujube tree. This reaches the height of fifteen or twenty feet and is found growing in abundance by the wayside around Jerusalem. The crooked branches of this shrub are armed with thorns growing in pairs, a straight spine and a curved one commonly occurring together at each point. The relic preserved in the Capella della Spina at Pisa, as well as that at Trier, which though their early history is doubtful and obscure, are among the largest in size, afford a good illustration of this peculiarity.


Not all of the reputed holy thorns are authentic. Many of the thorns were relics of the third class—objects touched to a relic of the first class, in this case some part of the crown itself. (A relic of the first class is a part of the body of a saint or, in this case, any of the objects used in the Crucifixion that carried the blood of Christ; a relic of the second class is anything known to have been touched or used by a saint; a relic of the third class is a devotional object touched to a first-class relic and, usually, formally blessed as a sacramental.) Again, even in comparatively modern times it is not always easy to trace the history of these objects of devotion, as first-class relics were often divided and any number of authentic third-class relics may exist.

The following are listed in "Gazeteer of Relics and Miraculous Images" lists the following:

It was at Notre Dame that my father and I had the fortune of seeing it. Three priests held it on a velvet pillow, protected by a crystal ring in which it lay. As we reached the front of the line, we bent to kiss the relic. We were in good company; Eva Peron kissed the very same Crown of Thorns when she visited Paris as part of her Rainbow Tour: 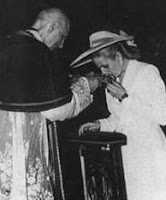